My inspiration for this term is a blog post in the New York Times that David Pogue wrote. I was fascinated by the post and it got me to thinking about a particular kind of bugs in software that are more common than most people may realize. You could say that these bugs are surprisingly common. In fact, if you wanted to be more precise, you could even say that this term applies to a specific type of "surprisingly common type of surprising bugs." Let me explain.

Grapefruit Is a Culprit in More Drug Reactions

The 42-year-old was barely responding when her husband brought her to the emergency room. Her heart rate was slowing, and her blood pressure was falling. Doctors had to insert a breathing tube, and then a pacemaker, to revive her.

They were mystified: The patient’s husband said she suffered from migraines and was taking a blood pressure drug called verapamil to help prevent the headaches. But blood tests showed she had an alarming amount of the drug in her system, five times the safe level.

Did she overdose? Was she trying to commit suicide? It was only after she recovered that doctors were able to piece the story together.

The previous week, she had been subsisting mainly on grapefruit juice. Then she took verapamil, one of dozens of drugs whose potency is dramatically increased if taken with grapefruit. In her case, the interaction was life-threatening.

Last month, Dr. David Bailey, a Canadian researcher who first described this interaction more than two decades ago, released an updated list of medications affected by grapefruit. There are now 85 such drugs on the market, he noted, including common cholesterol-lowering drugs, new anticancer agents, and some synthetic opiates and psychiatric drugs, as well as certain immunosuppressant medications taken by organ transplant patients, some AIDS medications, and some birth control pills and estrogen treatments. ... Under normal circumstances, the drugs are metabolized in the gastrointestinal tract, and relatively little is absorbed, because an enzyme in the gut called CYP3A4 deactivates them. But grapefruit contains natural chemicals called furanocoumarins, that inhibit the enzyme, and without it the gut absorbs much more of a drug and blood levels rise dramatically.

For example, someone taking simvastatin (brand name Zocor) who also drinks a small 200-milliliter, or 6.7 ounces, glass of grapefruit juice once a day for three days could see blood levels of the drug triple, increasing the risk for rhabdomyolysis, a breakdown of muscle that can cause kidney damage.

So what do interactions between grapefruit juice and drugs have to do with software testing?

Interactions between things are a very rich source of bugs in software. As anyone who has heard the infernal phrase "works on my machine" can tell you, software features and functions often work perfectly fine in many usage scenarios, hardware and software configurations , etc. - only to fail to work in ever-so-slightly different situations.

A dual-mode fault occurs whenever two test inputs must both be present to trigger a defect. Most software testers start encountering them quite frequently within days of starting their jobs. Some examples:

Whenever you hear "works on my machine" replies to your bug reports, and it takes a while for the issue to be replicated, odds are pretty good that a grapefruit juice bug might be involved.

Here's an example of an especially surprising grapefruit juice bug. This excerpt from Apple's online help files that the company posted after users of the original iPad complained about problems with Wi-Fi connectivity. Certain screen brightness settings were causing problems with the Wi-Fi signals. I'm not even to begin to guess how one would have anything to do with the other. 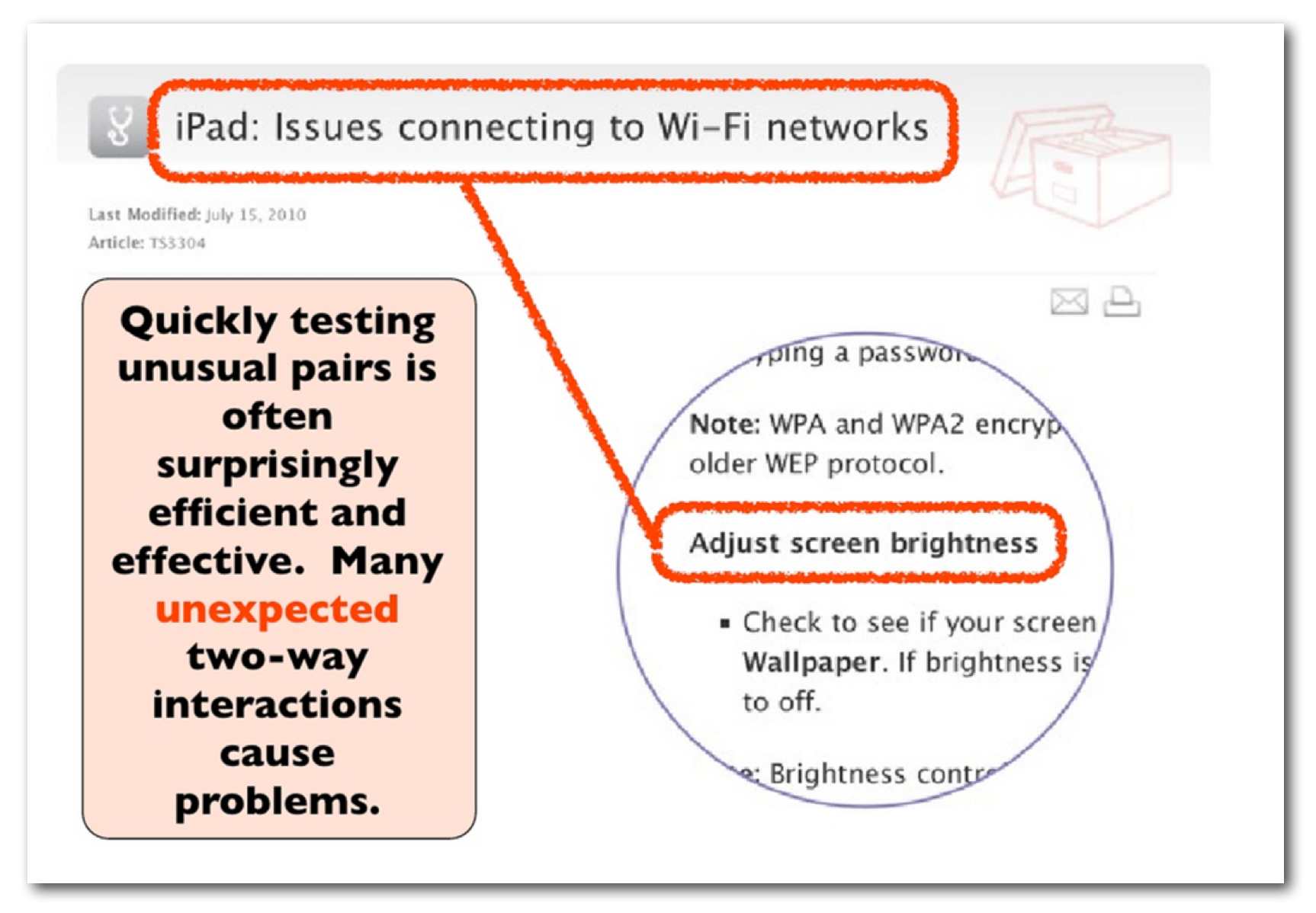 How to identify grapefruit juice bugs during your testing?

What is a tester to do when faced with more possible potential grapefruit juice bugs than he can handle using traditional methods?

If you're a software tester trying to do your best to determine whether a feature or function in your System Under Test will work "on everyone's machine," you've got a nightmare on your hands . Really nasty combinatorial explosions arise when you consider all of the possible combinations that would be required to test multiple hardware options, multiple software options, multiple usage scenarios, multiple test data inputs (and multiple combinations of the test data itself), multiple ways in which users enter data, and all of the rest of the "stuff that could vary" when people use your application. If you take the time to think expansively about the possible variations in a medium-sized applications, Quadrillions of possible tests often result.

While not eating grapefruit and not drinking grapefruit juice might be wise if you are taking drugs, there is rarely, if ever, such an easy method for eliminating the possibility of negative results due to software interactions. Refusing to support IE 6 in order to avoid the disproportionate number of grapefruit juice-like problematic interactions associated with IE6 would be as close as you could come in the world of software.

Design of Experiments-based test design methods can help testers come to grips with this challenge. Orthogonal array software testing (often referred to as OATS or simply OA testing) is a test design strategy that allows us to efficiently detect bugs created by interactions within the system. Orthogonal array software testing is based on the principles of multifactor designed experiments as first explored by Sir RA Fisher.

Design of Experiments-based test design methods are very-closely related to pairwise testing (AKA allpairs testing, all pairs testing, and pairwise-testing). Any of these test design strategies will allow a software tester to quickly generate a set of tests that includes tests for every single pair of test inputs.

This approach to test design often has multiple advantages, including faster test creation, more varied test scenarios, 100% coverage of all potential dual-mode faults (including hard-to-predict grape-fruit juice bugs), and often a smaller resulting set of tests that will be quicker to execute. Having said that, it is by no means a magical silver bullet. This approach to test design requires test designers with above average analytical abilities to identify the appropriate Parameters and Values for their system under test; this is sometimes easier said than done because it requires a new mindset from test designers.

Software testers can take solace that the challenges of software testing, while significant, are simple when compared to trying to understand the effects of drug interactions in people.

Combinatorial testing can look at bugs created by the interaction between multiple (3, 4, 5, 6...) variables. So if there was a bug that didn't get triggered just by using Chrome on Windows but it would get triggered if you also tried to replace an existing photo in your profile with a new profile photo into your profile (test idea number 3), then pairwise testing might not catch it. Pairwise test design would create a set of tests that would include at least one test for each of these pairs:

A set of pairwise might not fail to test for the specific combination of all three of those test inputs in the same test. With the use of combinatorial test design approaches, you could create test plans with 100% coverage for 3 way interactions and be sure that all 3-way interactions or 4-way interactions are covered. When you create sets of 3-way tests, 4-way tests, 5-way tests, and 6-way tests though, you'll quickly discover that the number of tests required starts to balloon.

Hexawise allows you to create test plans with the coverage interactions you desire. This allows you to create sets of tests from 2-way up all the way up to phenomenally-thorough 6-way sets of tests. In fact, it even lets you generate clever sets of risk-based tests that will, say, prioritize comprehensive 4-way coverage on 4 sets of Parameter Values while ensuring only pairwise coverage of the other, lower-priority, interactions in your system under tests. Hexawise also lets you create mixed strength test plans so if you have certain factors that you are very concerned about and want to provide coverage for more possible interactions you can set the interaction levels for those at a higher level.