We have mentioned George Box before. He was an amazing person, scientist and statistician. One of the traditions George started in Madison, Wisconsin was the Monday Night Beer Sessions.

An excerpt of Mac Berthouex’s introduction to An Accidental Statistician: The Life and Memories of George E. P. Box:

I met George Box in 1968 at the long-running hit show that he called “The Monday Night Beer Session,” an informal discussion group that met in the basement of his house. I was taking Bill Hunter’s course in nonlinear model building. Bill suggested that I should go and talk about some research we were doing. The idea of discussing a modeling problem with the renowned Professor Box was unsettling. Bill said it would be good because George liked engineers.

Bill and several of the Monday Nighters were chemical engineers, and George’s early partnership with Olaf Hougen, then Chair of Chemical Engineering at Wisconsin, was a creative force in the early days of the newly formed Statistics Department. I tightened my belt and dropped in one night, sitting in the back and wondering whether I dared take a beer (Fauerbach brand, an appropriate choice for doing statistics because no two cases were alike).

I attended a great many sessions over almost 30 years, during which hundreds of Monday Nighters got to watch George execute an exquisite interplay of questions, quick tutorials, practical suggestions, and encouragement for anyone who had a problem and wanted to use statistics. No problem was too small, and no problem was too difficult. The output from George was always helpful and friendly advice, never discouragement. Week after week we observed the cycle of discovery and iterative experimentation.

Justin, at a meet up with a few testers in Nottingham, out of a desire to do something nice for some testers in the community found himself buying beers for a few testers. The organizer asked Justin to put a couple slides together, then he posted them on Twitter and thanked us.

Justin made a similar offer to attendees at StarEast. And as luck would have it, the first guy to respond was Alan Page who was giving the keynote speech at the conference. Alan sent out tweets with showing testers getting and sharing a few beers. 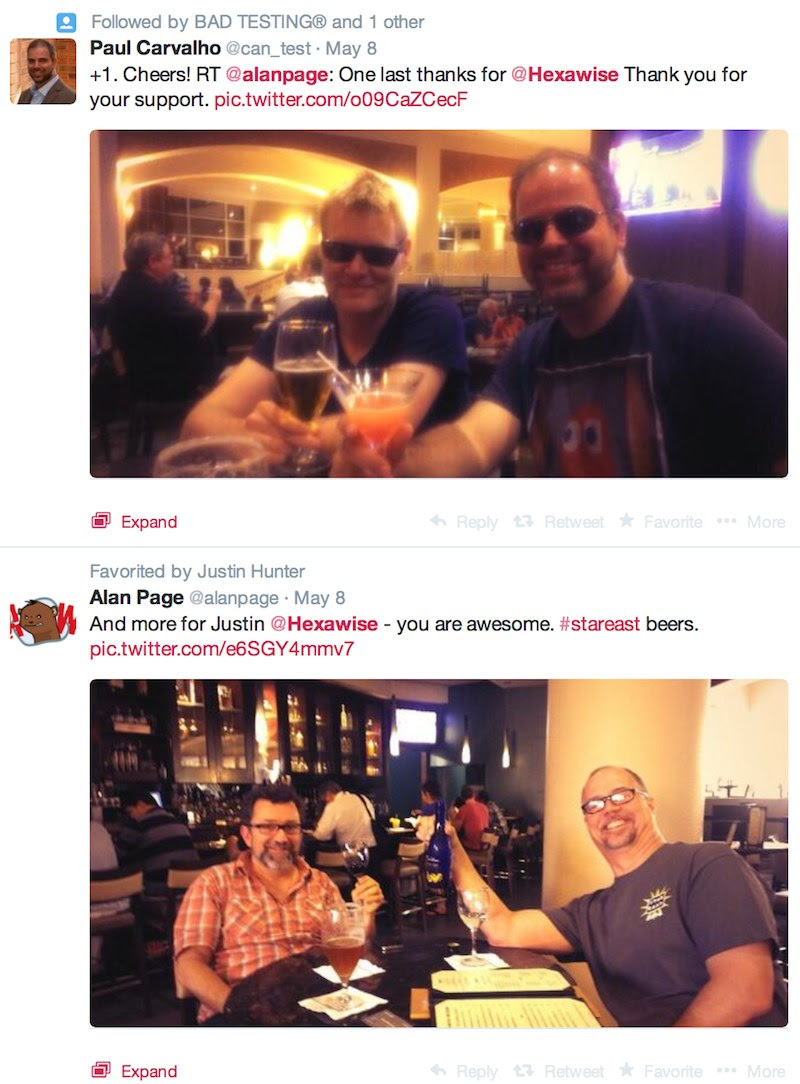 Now #HexawiseBuysTheBeers has become a way to encourage comradery among software testers at conferences and another small way the legacy of George Box lives on.