I am passionate about pairwise software testing techniques. I have helped dozens of teams, for example, carefully measure the benefits that can be created when teams of testers adopt pairwise and related combinatorial testing approaches to identify the test cases they will execute (as compared to manual test case identification methods). What usually happens is that tester productivity doubles. (See Combinatorial Software Testing - pdf download).

I believe these approaches will be much more widely adopted in a few years than they are now for the simple reason that they consistently deliver dramatic benefits to both the speed of software test design and the efficiency and thoroughness of software test execution. As more teams try these methods for themselves, and measures the benefits they achieve with them, broader adoption seems highly likely to me.*

I see three main barriers to broader adoption by the testing community at large:

This blog post addresses this third barrier. When testers sabotage their own test plans with a poor choice of inputs, they may well blame the test design strategy rather than themselves, which would be unfortunate. Here's one common problem I see (exaggerated a bit in this example to make my point).

Objective: create a set of tests that will check to see if the underwriting engine for a car insurance firm is calculating premium estimates correctly.

So far so good. We now have the initial ingredients for a thing of beauty; we have a set of parameters that could quickly result in a combinatorial explosion of possibilities and, ready to save the day, we have a test designer who has correctly identified this as an opportunity to achieve efficiency and thoroughness benefits through the application of pairwise testing methods. Our potential hero is a couple minutes away from creating a concise set of tests that will confirm not only confirm that each of the data points in the plan work as they should but that they work as they should in combination with each of the other data points in the test plan.

He's seen the Promised Land of improved efficiency and effectiveness and he's ready to enter. Unfortunately, with his next move, he demonstrates he's a doofus. Entry to Promised Land denied. Check out the values he chose to enter for each of his parameters. 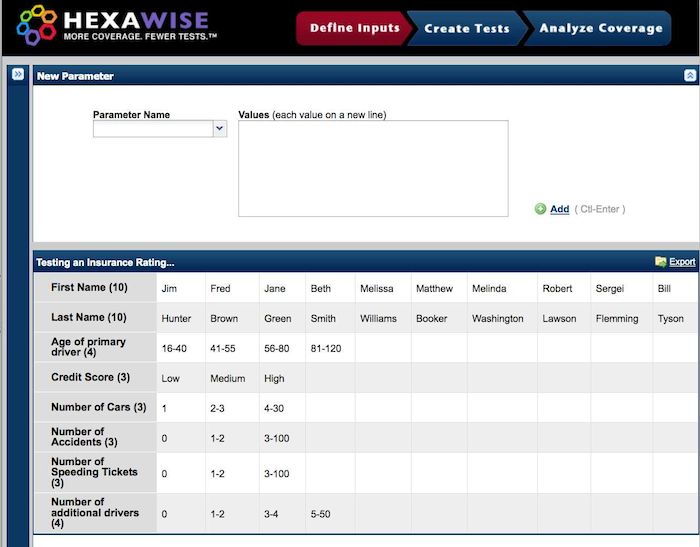 ... and let's break down our shame-faced test designer's bone-headed move here. Can you notice what is wrong in with his choices of values?

There are nine different parameters in the mix here. Of those, two ("First Name" and "Second Name"), are the least important to our current objective of looking for problems in the underwriting engine calculations. And yet...

He's added ten values to each of them. Oops! Whenever you are putting together a pairwise (or 2-way) test plan, the number of tests required will never be lower than the product of the number of parameter values from the two parameters that have the highest number of values. In plain English, that high-falutin' previous sentence means: when you have a plan with 7 parameters that have a maximum of 4 values each, "10 largely irrelevant values X 10 largely irrelevant values = you're a big fat idiot" because you'll create a test plan that has 100 test cases (as compared to a test plan that could have covered the System Under Test more effectively with fewer than a quarter of the tests you've just created).

For more information on pairwise and combinatorial testing, I would recommend the following sources:

If you are attempting to use pairwise and/or combinatorial testing methods and running into questions, I'd sincerely like to help. Please consider one or more of the following: