How to Convince Your Organization to Adopt Pairwise Software Testing

How to Convince Your Organization to Adopt Pairwise Software Testing

Since creating Hexawise, I've worked with executives at companies around the world who have found themselves convinced in the value of pairwise testing. And then they need to convince their organization of the value.

In this post I review my history helping convince organizations to try and then adopt pairwise, and combinatorial, software testing methods.

About 8 years ago, I was working at a large systems integration firm and was asked to help the firm differentiate its testing offerings from the testing services provided by other firms.

I Googled "Design of Experiments Software Testing." That search led me to Dr. Madhav Phadke (who, by coincidence, had been a former student of my father). More than 20 years ago now, Dr. Phadke and his colleagues at ATT Bell Labs had asked the question you're asking now. They did an experiment using pairwise test design / orthogonal array test design to identify a subset of tests for ATT's StarMail system. The results of that testing effort were extraordinarily successful and well-documented.

Shortly after doing that, while working at that systems integration firm, I began to advocate to anyone and everyone who would listen that designing approach to designing tests promised to be both (a) more thorough and (b) require (in most but not all cases) significantly fewer tests. Results from 17 straight projects confirmed that both of these statements were true. Consistently.

How did we demonstrate that this test design approach led to both more thorough testing and much more efficient testing? We followed these steps:

*This third measurement was usually an estimate because a significant number of teams had not tracked the amount of time it took to create the original set of tests. 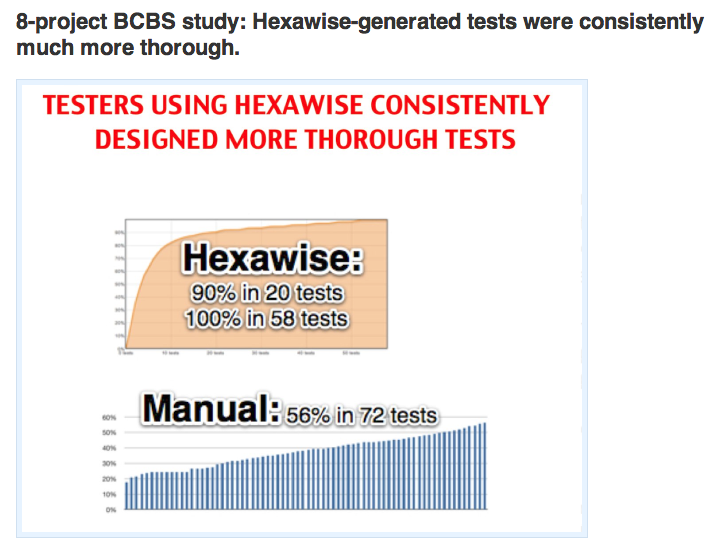 Those experiences - combined with the realization that many Fortune 500 firms were starting to try to implement smarter test design methods to achieve these kinds of benefits but were struggling to find a test design tool that was user-friendly and would integrate into their other tools - led me to the decision to create Hexawise.

Additional Advice and Lessons Learned Based on My Experiences

I have already elaborated some test plans that would save us up to 50% effort with that method. But now my boss and other colleagues are asking me for a proof that these pairwise test cases suffice to make sure our software is running well.

In that case, my advice is three-fold:

First, appreciate how your own thinking has evolved and understand that other people will need to follow a similar journey (and that others won't have as much time to devote as you have had to experience learnings first-hand).

When I was creating Hexawise, George Box, a Design of Experiments expert with decades of experience explaining to skeptical executives how Design of Experiments could deliver transformational improvements to their organizations' efficiency and effectiveness, told me "Justin, you'll experience three phases of acceptance and acceptance will happen more gradually than you would expect it to happen. First, people will tell you 'It won't work.' Next, they'll say "It won't work here." Eventually, he said with a smile, they'll tell you 'Of course this works. I thought of it first!'

When people hear that you can double their test execution productivity with a new approach, they won't initially believe you. They'll be skeptical. Most people you're explaining this approach to will start with the thought that "it is nice in theory but not applicable to what I'm doing." It will take some time and experience for people to understand and appreciate how dramatic the benefits are.

Case in point: I will be talking to a senior executive at a large capital markets firm soon about how our tool can help them transform the efficiency and effectiveness of their testing group. And I can introduce them to a client of ours that is using our test design tool extensively in every single one of their most important IT projects. Will that executive take me up on my offer? I hope so, but based on past experience, I suspect odds are good that he'll instead react with 'Yes, yes, sure, if companies were people, that company would be our company's identical twin, but still... It won't work here.'

Third, at the end of the day, the most effective approach I have found to address that understandable skepticism and to secure organizational-level buy-in and commitment is through gathering hard, indisputable evidence on multiple projects that the approach works at the company itself through a bake-off approach (e.g., following those four steps outlined above. A few words of advice though.

My proposed approach isn't for the faint of heart. If you're working at a large company with established approaches, you'll need patience and persistence.

Even after you gather evidence that this approach works in Business Unit A, and B and C, someone from Business Unit D will be unconvinced with the compelling and irrefutable evidence you have gathered and tell you 'It won't work here. Business Unit D is unique.' The same objections may likely arise with results from "Type of Testing" A, B, and C. As powerful and widely-applicable as this test design approach is, always remember (and be clear with stakeholders) that it is not a magical silver bullet.

James Bach raises several valid limitations with using this approach. In particular, this approach won't work unless you have testers who have relatively strong analytical skills driving the test design process. Since pairwise test case generating tools are dependent upon thoughtful test designers to identify appropriate test inputs to vary, this approach (like all test design approaches) is subject to a "garbage in / garbage out" risk.

Project leads will resist "duplicating effort." But unless you do an actual bake-off stakeholders won't appreciate how broken their existing process is. There's inevitably far more wasteful repetition hidden away in standard tests than people realize. When you start reporting a doubling of tester productivity on several projects, smart managers will take notice and want to get involved. At that point - hopefully - your perseverance should be rewarded.

Some benefits data and case studies that you might find useful:

If you can't change your company, consider changing companies

Lastly, remember that your new-found skills are in high demand whether or not they're valued at your current company. And know that, despite your best efforts and intentions, your efforts might not convince skeptics. Some people inevitably won't be willing to take the time to understand. If you find yourself in a situation where you want to use this test design approach (because you know that these approaches are powerful, practical, and widely-applicable) but that you don't have management buy-in, then consider whether or not it would be worth leaving your current employer to join a company that will let you use your new-found skills.

Most of our clients, for example, are actively looking for software test designers with well developed pairwise and combinatorial test design skills. And they're even willing to pay a salary premium for highly analytical test designers who are able to design sets of powerful tests. (We publicize such job openings in the LinkedIn Hexawise Guru group for testers who have achieved "Guru" level status in the self-paced computer-based-training modules in the tool).